What map is nicknamed ‘The Peacock Map? 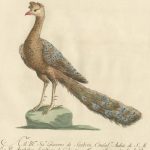 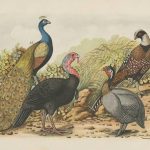 The history of the famous Peacock Map of Friesland is rather colourful and associated with the similarly colourful Peacock bird.

The collective term is peafowl, a male a peacock, the female a peahen. Babies are peachicks. A group of peacocks is an “ostentation”, a “muster” or a “party”.

A peahen has sensors in her crest that allow her to feel the vibrations of a mate far away. Her head feathers are tuned to vibrate at the exact same frequencies at which a displaying peacock rattles his tail. The pressure-wave literally rattles her head for attention.

When peacocks mate, they give out a loud copulatory call. They can fake this call to attract more females. By pretending they are mating, they could convince females they are more sexually active—and therefore genetically fitter—than their rivals. The birds that made the most fake calls, scored the most hookups. Singing usually occurs just before, just after, or sometimes during copulation.

The two Asiatic species are the blue or Indian peafowl and the green peafowl of Southeast Asia; the one African species is the Congo peafowl.

It is one of the national symbols of India. Myanmar used to show a peacock in its flag.

In 1956 a peacock logo was made for broadcaster NBC, due to the increase in colour programming. The current logo debuted in 1986.

For sale, with other Peacock Maps, on www.maps-prints.com : the so-called PEACOCK MAP of Friesland! And more!