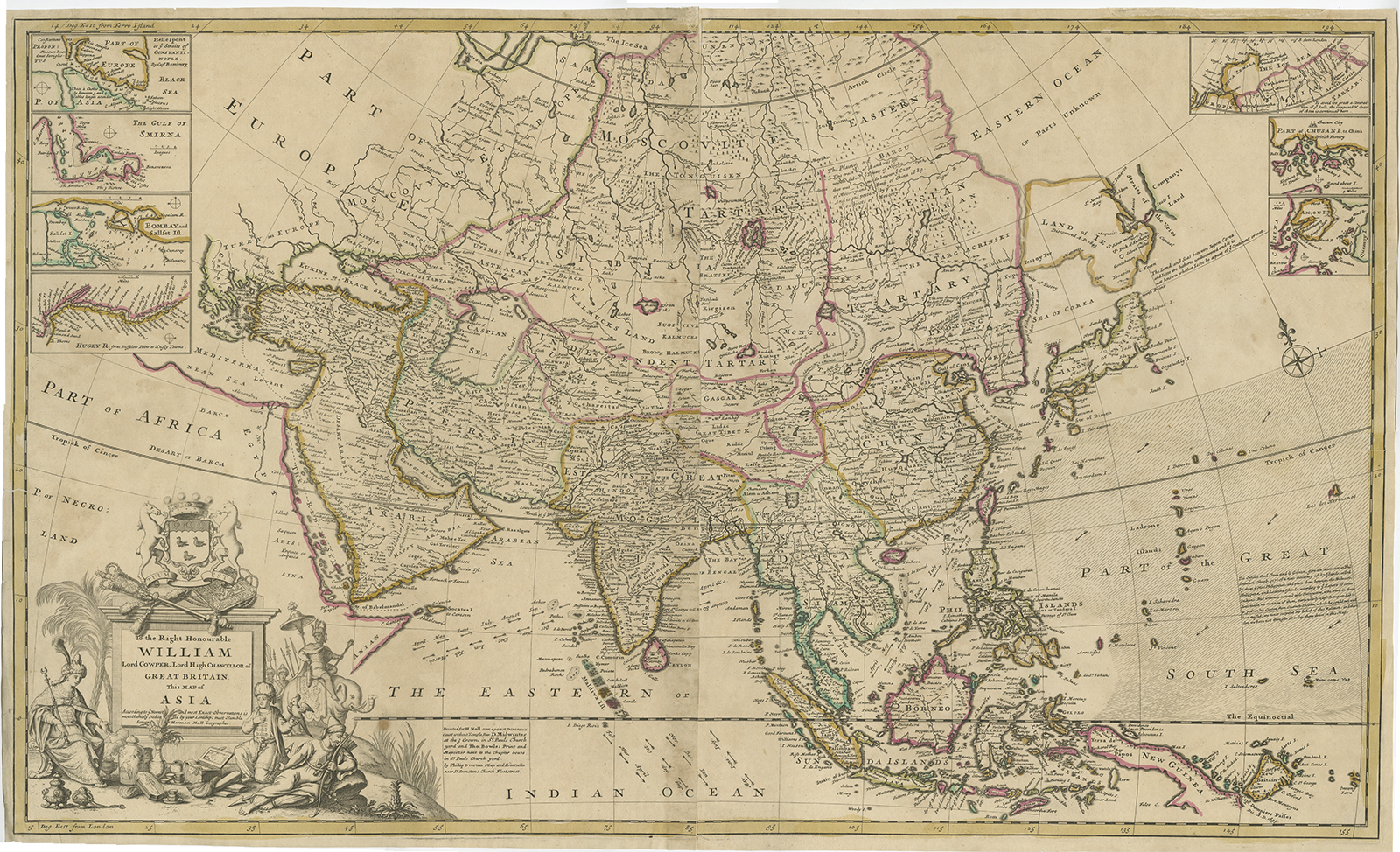 A very fine and rare large map of Asia compiled by Herman Moll (c. 1654-1732) that was eventually published in his large-folio World Atlas or the World Described in London in 1717. The atlas consisted initially of 25 mostly two-sheet maps of the world and its regions which were sold individually from 1707 onwards and assembled in completed atlas form in 1717. This map was not bound into an atlas and was sold as a separate two-sheet map. The map contains seven insets of important areas in Asia including the River Hugly, the Gulf of Smirna, Bombay, the Hellespont, Quemoi, Chusen and Nova Zembla.

Moll was the most important cartographer working in London during his era, a career that spanned over fifty years. His origins have been a source of great scholarly debate; however, the prevailing opinion suggests that he hailed from the Hanseatic port city of Bremen, Germany. Joining a number of his countrymen, he fled the turmoil of the Scanian Wars for London, and in 1678 is first recorded as working there as an engraver for Moses Pitt on the production of the English Atlas . It was not long before Moll found himself as a charter member of London’s most interesting social circle, which congregated at Jonathan’s Coffee House at Number 20 Exchange Alley, Cornhill. It was at this establishment that speculators met to trade equities (most notoriously South Sea Company shares). Moll’s coffeehouse circle included the scientist Robert Hooke, the archaeologist William Stuckley, the authors Jonathan Swift and Daniel Defoe, and the intellectually-gifted pirates William Dampier, Woodes Rogers and William Hacke. From these friends, Moll gained a great deal of privileged information that was later conveyed in his cartographic works, some appearing in the works of these same figures. Moll was highly astute, both politically and commercially, and he was consistently able to craft maps and atlases that appealed to the particular fancy of wealthy individual patrons, as well as the popular trends of the day. In many cases, his works are amongst the very finest maps of their subjects ever created with toponymy in the English language.  (Ref. Shirley, Maps in the Atlases of the British Library I, T.Moll-4b, 4; Cf. Reinhartz, The Cartographer and the Literati: Herman Moll and his Intellectual Circle.)