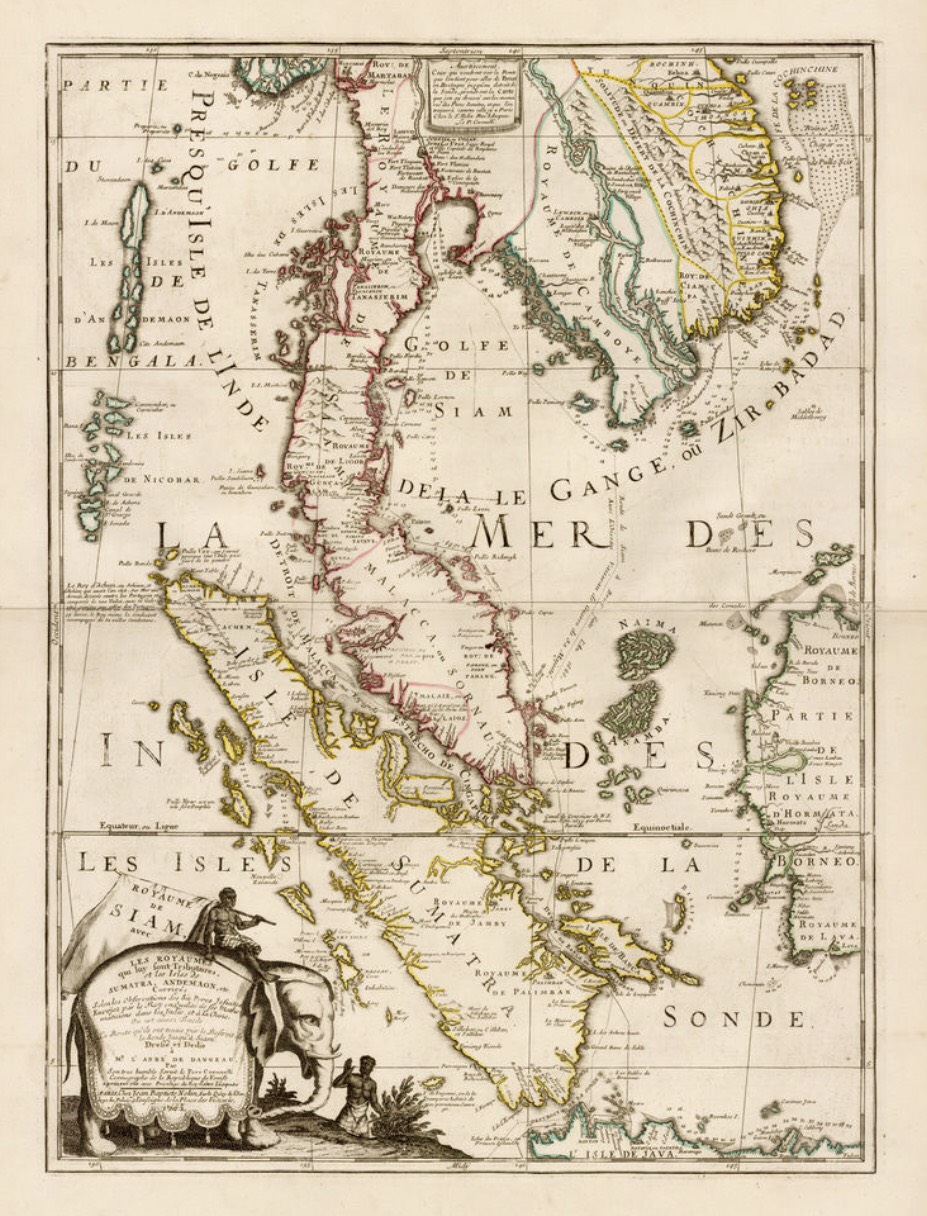 Antique Map of South-East Asia by Nolin and Coronelli (1742)

1742 edition of this historically important map of Southeast Asia, by Nolin and Coronelli, issued immediately prior to the Siamese Revolution of 1688, which henceforth restricted European activities in the kingdom.

The present work is an important map of Southeast Asia, extending from the southern part of the Indochinese Peninsula through Malaya, to the northern coastline of Java and the eastern part of Borneo. The map is filled with information including extensive soundings along coastlines and historical notations. The adornment of the map with a large elephant, making up the title cartouche, makes this map a favorite among collectors.

The cartographic detail on the map is groundbreaking, especially with respect to southern Siam. Its depiction of the region was by far the most accurate made to date, and would remain so for over a century thereafter. It is the result of France’s first embassy to Southeast Asia in 1685, which was led by the Chevalier de Chaumont in the company of six Jesuit fathers. The route of their embassy is noted on the map.

At the time, Siam was experiencing the ‘golden age’ of the Ayutthaya Period (1351-1767). The capital city of Ayutthaya, located further up the Chao Praya River from modern Bangkok (noted on the map as ‘Fortresse de Bankok’), is thought to have been the world’s largest city at time, with over 1 million residents. Ayutthaya is noted on the map as “Judtija”, seemingly a phonetic interpretation of the true name.

Siam was first visited by Europeans in 1511, when Duarte Fernandes led a Portuguese embassy to Ayutthaya. While Siam was never formally colonized or claimed by a European power, as shown on the map, the French and Dutch had set up trading posts and Christian missions along the Chao Praya estuary. Brisk business was also done by European commercial agents in Ayutthaya itself.

However, shortly after Chaumont’s embassy, there was intense popular uprising against the growing foreign presence in Siam. King Narai of Siam even went as far as to make a Greek adventurer, Constantine Phaulkon, his de facto prime minister. This was all too much for Siamese officials and nationalists.

In what became know as the Siamese Revolution of 1688, forces loyal to the Mandarin Phetracha overthrew Narai’s government. Phetracha ascended to the throne and immediately expelled the French from Siam, while severely limiting the activities of the Dutch and other foreigners. This ensured that following the publication of the present map very little new European mapping was executed in Siam during the 18th-century.

The present map was a product of the collaboration between Jean-Baptiste Nolin (1657-1708), who was one of the official mapmakers to the King Louis XIV, and Vincenzo Maria Coronelli (1650-1715), a Venetian master who had been invited to Paris by the King to undertake cartographic projects, including the construction of the colossal ‘Marly Globes’. The result of this collaboration was the most up to date and detailed contemporary maps of many parts of the World, at a time when France assumed a leading role in the exploration of America and Asia.

The Nolin-Coronelli mapping of Southeast Asia would become the standard for many decades after the creation of this map, and is a cornerstone of any collection of maps of Thailand and the Malay Peninsula.