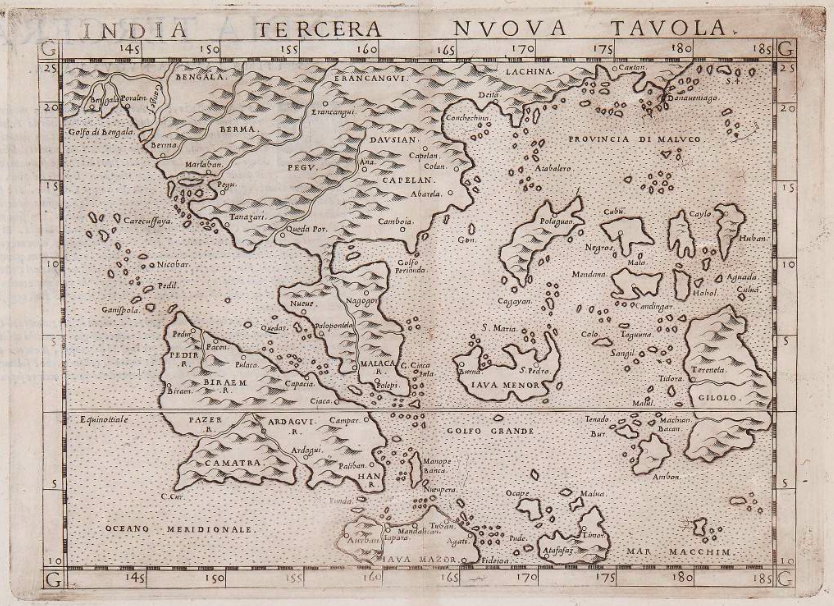 Early map of Southeast Asia based on Gastaldi’s foundation map (1548) of the region. Covers from the Gulf of Bengal to the southern coast of China and as far south as Java and Timor. The strangely shaped islands and early place names provide a fascinating early view of the region.

The map comes from Ptolemy’s Geographia, edited by Ruscelli, published in Venice in multiple editions between 1561 and 1598. The map is based on the same work of Giacomo Gastaldi (1548), which probably also personally drew these maps, engraved by the brothers Livio and Giulio Sanuto. The text of Ruscelli and his maps are considered as the best modern atlas to the first version of the Theatrum Orbis Terrarum by Ortelius of 1570.

Girolamo Ruscelli (1500s-1566) was an Italian polymath, humanist, editor, and cartographer active in Venice during the early 16th century. Ruscelli is best known for his important revision of Ptolemy’s Geographia, which was published post humously in 1574. It is generally assumed that Alexius Pedemontanus was a pseudonym of Girolamo Ruscelli. In a later work, Ruscelli reported that the Secreti contained the experimental results of an ‘Academy of Secrets’ that he and a group of humanists and noblemen founded in Naples in the 1540s. Ruscelli’s academy is the first recorded example of an experimental scientific society. The academy was later imitated by Giambattista Della Porta, who founded an ‘Accademia dei Secreti’ in Naples in the 1560s.