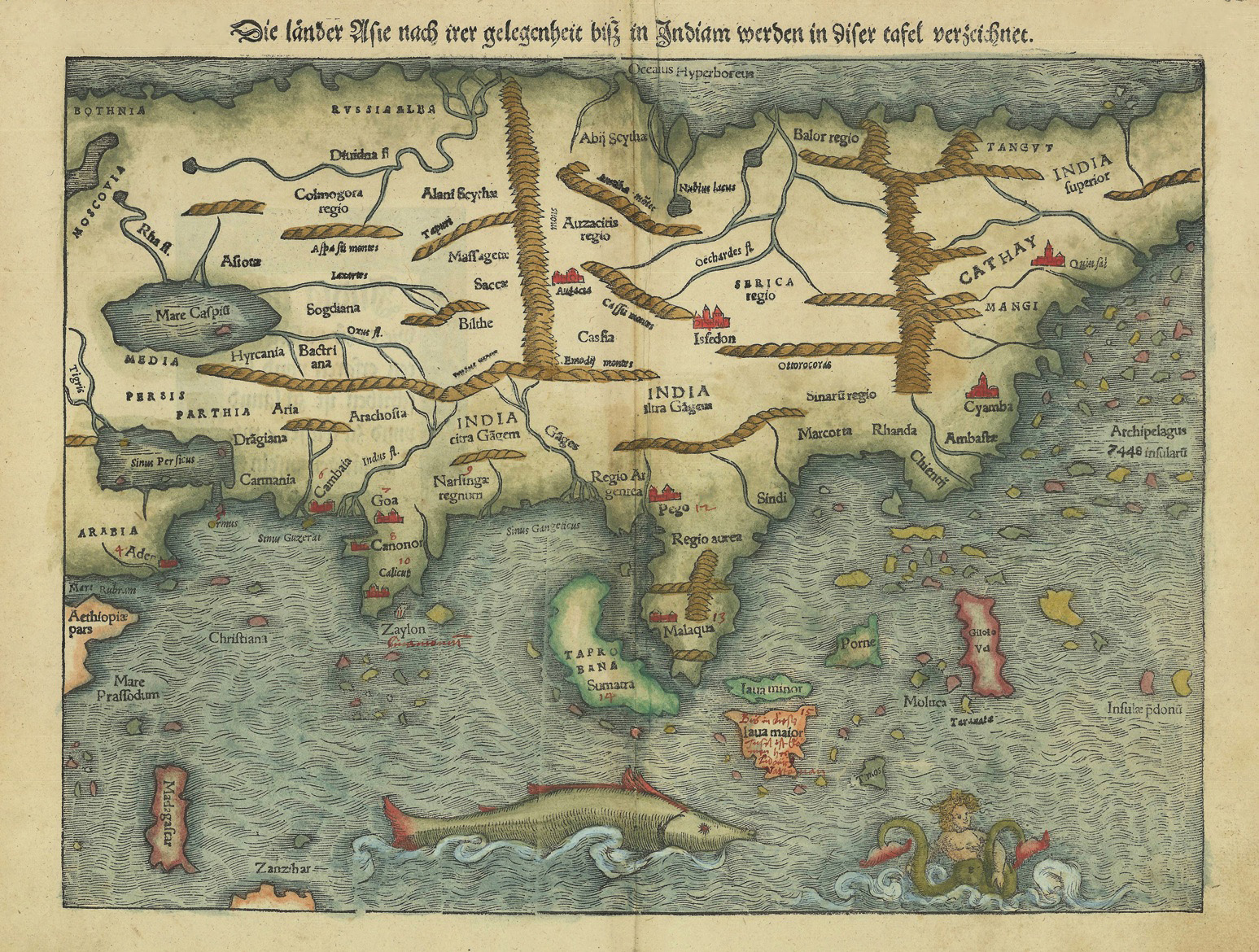 A very rare mid-16th century German woodcut map of the Indian Ocean and Asia in old colour by Sebastian Münster (1488-1552), a German geographer, cartographer, Hebraist and theologian and published in the 1550 German edition of his monumental work Cosmographia, a compendium of some 1,223 pages and 910 woodcuts including maps and dozens of city views. The Cosmographia ran to at least 27 editions between 1553 and 1628 in German, French, Latin, Italian and Bohemian. Münster died in May 1552, a victim of the plague that swept the city of Basle between 1550 and 1553. The map shows Asia from the Caspian Sea and Persian Gulf to the Pacific. The island of Sumatra is also designated as Taprobana; Java Major is shown below an unknown island of Java Minor. The Pacific Ocean, which is largely unrecognizable, shows an archipelago of 7448 islands, a forerunner to the better understanding of Southeast Asia, The map does not include Japan, which appears on the map of America. The northeastern coast of Asia is also omitted. An island named Zanzibar appears east of Madagascar. The map also includes a large whale type sea monster and a mermaid type creature. Although largely based on Ptolemy’s work, the map incorporates some of the more recent Portuguese discoveries. The outlines of the Indian subcontinent, between the Indus and the Ganges rivers are in a recognizable form, with “Zaylon” (Ceylon/Sri Lanka) correctly shown as an island. The Portuguese outposts of Goa and Calicut, the first place where Vasco da Gama landed in 1497, are depicted. The Portugese trading port of “Malaqua” is shown. “Moloca” islands, center of the spice island trade and the object of considerable conflict between Spain and Portugal is shown. The resolution of the dispute was the official purpose of Magellan’s epic circumnavigation. The treatment of “Cathay” (China) is consistent with the writings of Marco Polo and other Venetian travellers.

The map contains a lot of red ink graffiti mostly numbers that would seem to refer to a separate reference. Graffiti on the island of Java appears to be old Dutch (late 17th or early 18th century) that refers to there being an inland sultanate of Mataram. Verso has a small colour title page engraved with cherubs.

Condition: Very good. condition apart from some minor staining and foxing in the margins and a corner crease and some roughness along the centre margin.
Size: 256 x 343 mm.
Artist: S. Münster
Year: c.1550
Purchase Code: M1742