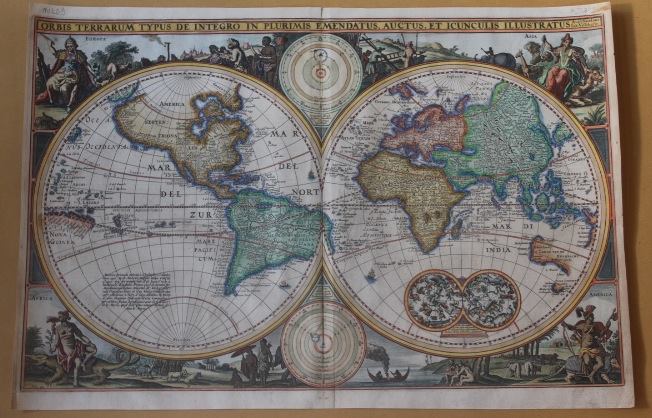 Antique world map twin hemisphere titled ‘ORBIS TERRARUM TYPUS DE INTEGRO IN PLURIMIS EMENDATUS, AUCTUS, ET ICUNCULIS ILLUSTRATUS’. This fine mid-17th century twin-hemisphere world map in old colour was the first of several world maps produced by Nicolaus Visscher I (1618-1679) in Amsterdam in 1657 was the first of several maps which he produced for Dutch Bibles and would become the prototype for Dutch Bible maps published over the next 100 years. Australia and Van Diemen’s Land are shown, but the north coast of Australia discovered during Abel Tasman’s second voyage of 1644 is not yet shown. Two Celestial hemispheres are included along with a lengthy annotation on the discovery of America and recent circumnavigations. The allegorical figures in the four corners of the map represent the four named continents.

The Visscher family were art and map dealers in Amsterdam during the 17th century. Funded by C. J. Visscher (1587-1652), the business was continued by his son and grandson both named Nicolaes. Nicolaes Visscher I was born 1618 in Wenns, Austria. He died 1679 in Linz. Nicolaes Visscher II (Amsterdam; 1649-1702). After the death of Nicolas II, his widow passed the business to Pieter Schenk.