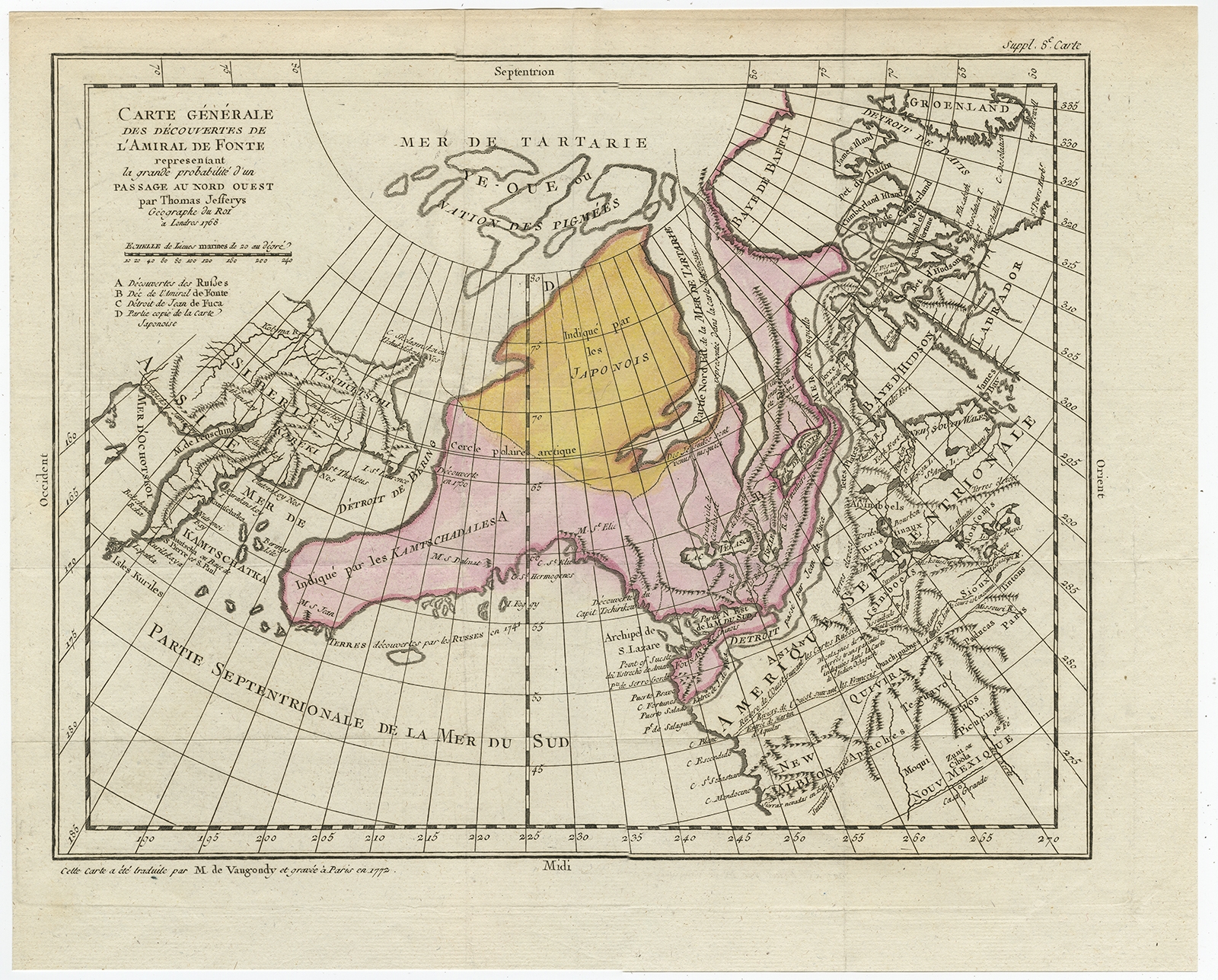 Description: Antique print, titled: ‘Carte Generale des Decouvertes de l’Amiral de Fonte (…).’ – Map of the discoveries of Admiral de Fonte, showing the possibility of a north-west passage. Interesting map of the NW Coast of America and the NE Coast of Asia, based upon Jefferys’ map of 1768. Prior to Cook’s 1st Voyage, the English, French and Russians were actively debating the cartography of the region in the North Pacific between Asia and North America. The Russian explorations of the first half of the 18th Century, including those by Behring, Tchirikow and others, had been reported by JN De L’Isle, who had worked with the Russians and was privy to their latest discoveries. The mythical voyages of De Fuca, d’Aguilar and De Font were still very much in evidence in contemporary cartography, as were concepts of a NW Passage, the Sea of the West, River of the West and other vestiges of 16th and 17th Century conjectural / mythical cartography. Following the publication by Buache of his maps on the region, the debate between the French and English was quite fertile, so much so that Diderot dedicated most of his 10 map supplment to the region. This map shows the Jefferys model, including a wide De Fuca based River from Puget Sound to the Atlantic over Hudson’s Bay, several significant rivers flowing from the Pacific to the middle of North America, and Jesuit based water passages from the Pacific to the Arctic Seas. A massive approximation of Alaskan Archipelago is shown, along with the Russian discoveries.

This old antique print originates from: ‘The Encyclopédie ou Dictionnaire raisonné des sciences, des arts et des métiers, par une Société de Gens de lettres.’ which was published under the direction of Diderot and d’Alembert, with 17 volumes of text and 11 volumes of plates between 1751 and 1772. It contained 72,000 articles written by more than 140 contributors. This encyclopdia was a massive reference work for the arts and sciences, as well as a means to propagate the ideas of the French Enlightment. The impact of this encyclopedia was enormous.

Artists and Engravers: Made by ‘Denis Diderot’ after ‘Thomas Jefferys’. Denis Diderot (1713-1784) was a French philosopher, art critic and writer. Jean le Rond d’Alembert (1717-1783) was a French mathematician, mechanician, physicist and philosopher. These plates are engraved by J.A.Defehrt and Bonaventure/Benoit-Louis Prevost after J.R Lucotte or Goussier. Thomas Jefferys (c.1719 – 1771), ‘Geographer to King George III’, was an English cartographer who was the leading map supplier of his day.[1] He engraved and printed maps for government and other official bodies and produced a wide range of commercial maps and atlases, especially of North America.