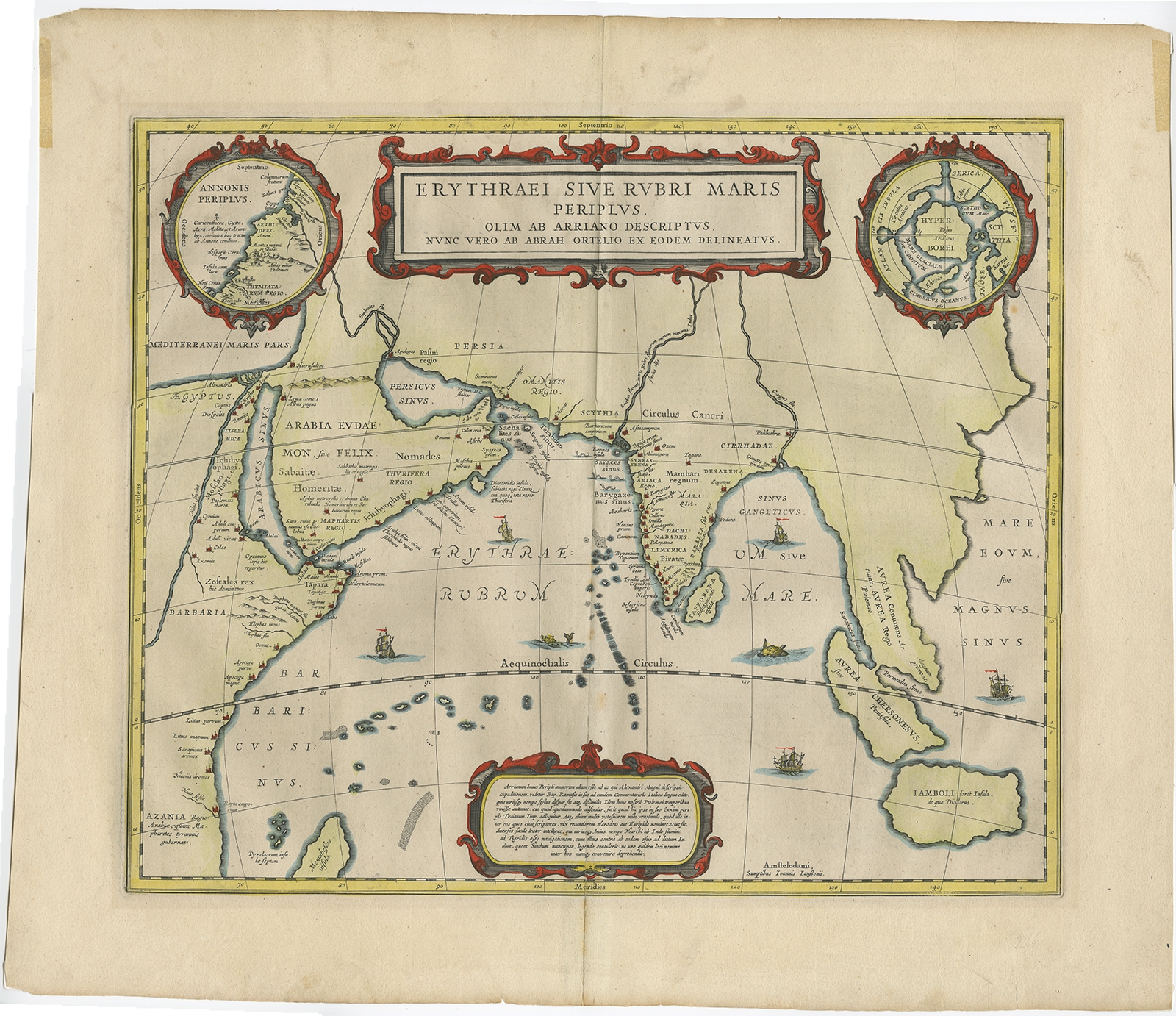 Description: Antique map titled ‘Erythraei Sive Rubri Maris Periplus olim ab arriano descriptus nunc vero ab abrah ortelio ex eodem delineatus’. Map of the Indian Ocean, or Erythraean Sea, as it was in antiquity. Composed by Jan Jansson after a similar 1597 map published by A. Ortelius in his Parergon. Covers from Egypt and the Nile valley eastward past Arabia and India, to Southeast Asia and Java.

Artists and Engravers: Johannes Janssonius (Jansson),( 1588- 1664) Amsterdam was born in Arnhem, the son of Jan Janszoon the Elder,a publisher and bookseller. In 1612 he married Elisabeth de Hondt, the daughter of Jodocus Hondius. He produced his first maps in 1616 of France and Italy. In 1623 Janssonius owned a bookstore in Frankfurt am Main, later also in Danzig, Stockholm, Copenhagen, Berlin, Königsberg, Geneva and Lyon. In the 1630s he formed a partnership with his brother in law Henricus Hondius, and together they published atlases as Mercator/Hondius/Janssonius. Under the leadership of Janssonius the Hondius Atlas was steadily enlarged. Renamed Atlas Novus, it had three volumes in 1638, one fully dedicated to Italy. 1646 a fourth volume came out with ”English County Maps”, a year after a similar issue by Willem Blaeu. Janssonius’ maps are similar to those of Blaeu, and he is often accused of copying from his rival, but many of his maps predate those of Blaeu and/or covered different regions. By 1660, at which point the atlas bore the appropriate name ”Atlas Major”, there were 11 volumes, containing the work of about a hundred credited authors and engravers. It included a description of ”most of the cities of the world” (Townatlas), of the waterworld (Atlas Maritimus in 33 maps), and of the Ancient World (60 maps). The eleventh volume was the Atlas of the Heavens by Andreas Cellarius. Editions were printed in Dutch, Latin, French, and a few times in German.