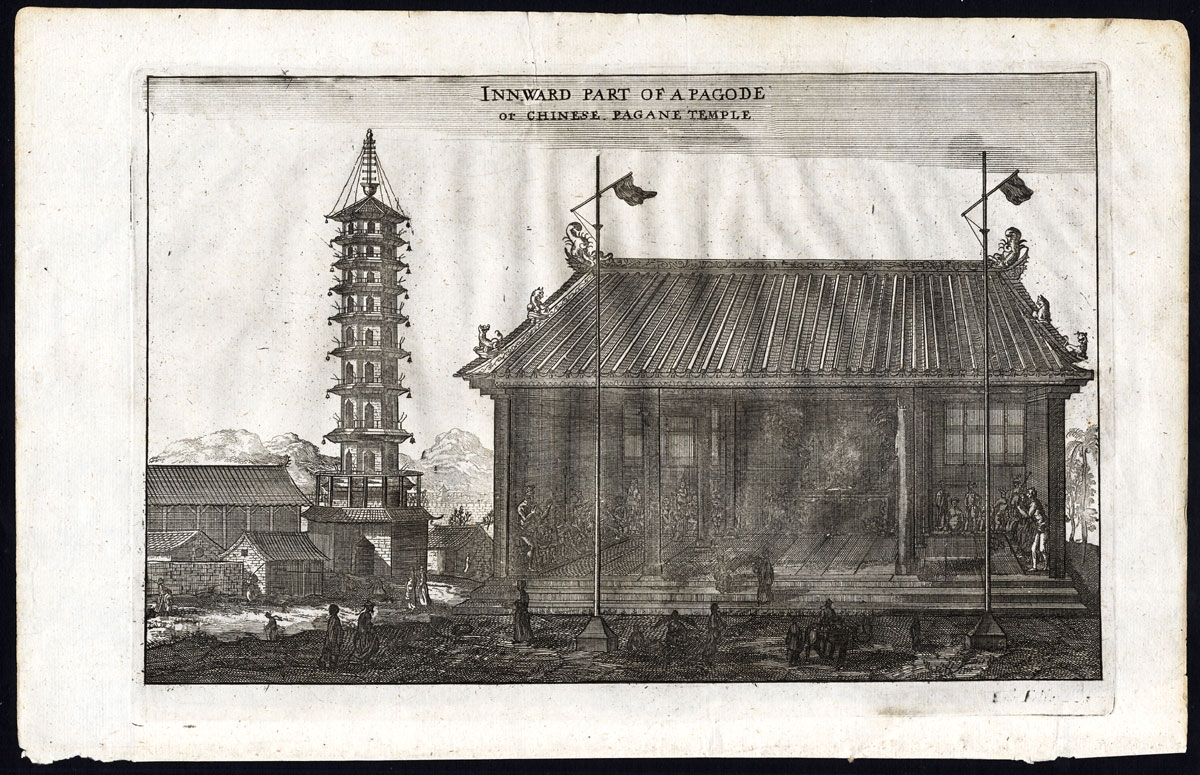 Description: Plate: ‘Innward part of a Pagode or Chinese pagane temple’. This plate shows the inside of a Chinese Pagoda, an Asian place of religious worship. Also depicted are many statues. This attractive original old antique print / plate originates from ‘An Embassy from the East India Company of the United Provinces, to the Grand Tartar Cham, Emperor of China (…) Also an epistle of father John Adams (…) With an appendix of several remarks taken out of father Athanasius Kircher.’, by John Ogilby, 2nd edition, published in London 1673. This is in fact a translation of the original work by Joan Nieuhof, first published in Dutch in 1665 (‘Gezandtschap der Nederlandtsche Oost-Indische Compagnie …) The work was famous for its wealth of engravings, while the text was based on earlier (Jesuit) sources as well. In 1669 Ogilby published the first edition of the Dutch Embassy to China. This book combined Nieuhoff’s original work with letters from the Jesuit father John Adams as well as a partial translation of Athanasius Kircher’s China Illustrata (1667). The engravings in Nieuhof’s original Dutch edition were based on illustrations done by artists in China and contained around 150 illustrations. Ogilby had many of them copied for his English translation, although he included around a third fewer pictures. The titles of the illustrations were changed into English and the artists, such as Wenceslaus Hollar, who did the copying, added their own signatures in place of the original artists’. This was standard practice for the time.There are also around twenty-five illustrations in Ogilby’s that were not included in the Dutch editions such as the Manchu lady. Some of these illustrations were sourced from the works of Athanasius Kircher.

Artists and Engravers: Johan / Jan / Johannes Nieuhof / Nieuhoff / Neuhof (1618-1672) was a Dutch traveler who wrote about his journeys to Brazil, China and India. The most famous of these was a trip of 2,400 km from Canton to Peking in 1655-1657 as part of a Dutch envoy, which enabled him to become an authoritative Western writer on China. Johan Nieuhof was born in Uelsen, Germany, of which his father (originally from Zwolle) was mayor. Nieuhof left for Brazil in 1640 as a reserve officer-candidate – from then on, barring two short family visits in 1658 and 1671, he spent all the rest of his life abroad. After an adventurous career in the service of the Dutch East India Company (or VOC) – between 1660 and 1667 he occupied posts in India and on Ceylon – he then lived in Batavia until 1670. He then disappeared without trace on Madagascar, traveling in a sloop from which he had landed to seek drinking water. The engravings are made after Nieuhoff’s drawings. John Ogilby (1600-1676) was a Scottish translator, impresario and cartographer. Best known for publishing the first British road atlas, he was also a successful translator as in this work, noted for publishing his work in handsome illustrated editions. VÃ¡clav Hollar, known in England as Wenceslaus or Wenceslas and in Germany as Wenzel Hollar (1607-1677), was a Bohemian etcher, who lived in England for much of his life. He was born in Prague, and died in London, being buried at St Margaret’s Church, Westminster.