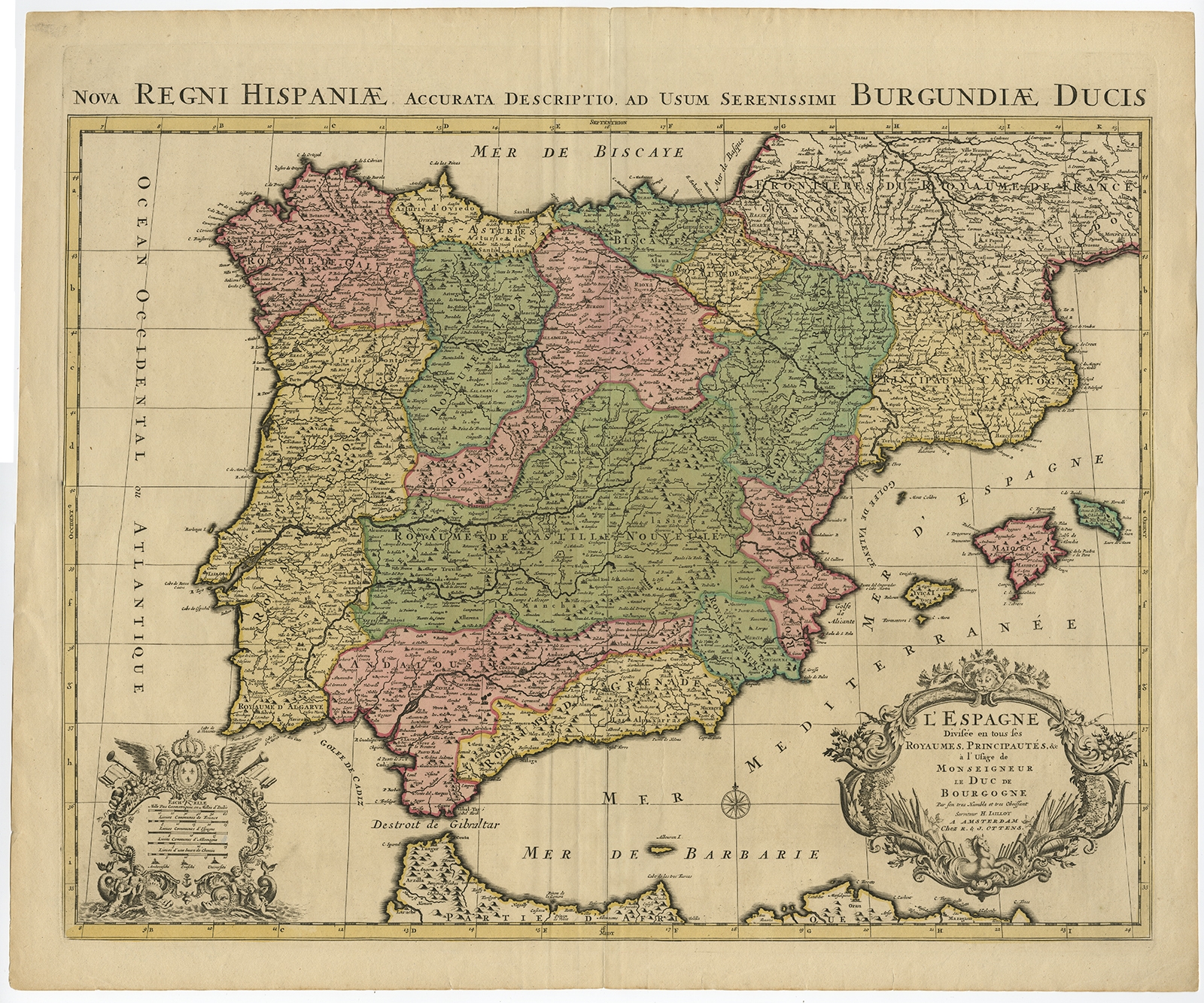 Description: Antique print, titled: ‘Nova Regni Hispaniae Accurata Descriptio, ad usum Serenissimi Burgundiae Ducis – L’Espagne Divisee en tous ses Royaumes, Principautes, &c (…).’ Large, handsome map of the Iberian Peninsula with Portugal, Spain and the Balearic Islands. The map is exceptionally detailed, with the map divided into principalities and royal regions. The map is adorned with two lovely, Baroque cartouches, one for the mileage scale topped with an armorial shield and the title cartouche surrounded in a vine motif with a lion on top and a horse on the bottom. Source unknown, to be determined.

Artists and Engravers: Made by ‘Alexis Hubert Jaillot’ after ‘R. & I. Ottens’. Alexis Hubert Jaillot (1632-1712) , was a French sculptor, engraver, publisher and cartographer. Native of Franch-Comte, followed his elder brother, Pierre Simon to Paris in 1657. From 1664 he was student at the St. Lucas Academy. In 1665 he was created Sculpteur du Roi & in 1678, Sculpteur & Geographe ordinaire du Roi, official geographer to King Louis XIV. He worked closely with the heirs of Nicolas Sanson, Guillaume & Adrien Sanson, in the late 1660’s and early 1670’s. His most famous works include the Atlas Nouveau, first published in 1674 (reissued in numerous editions, including Dutch editions by Mortier and Covens and Mortier) and Neptune Francois (1692) and Atlas Francais (1695). He also reissued the series of 4 Willem Blaeu Continental Wall maps in about 1669 with French border texts. The family remained closely involved in cartography, Alexis Hubert being succeeded by his son, Bernard Jean Hyacinthe Jaillot (1673-1739) and grandson, Bernard Antoine Jaillot (d.1749) and the latter’s brother-in-law, Jean Baptiste-Michel Renou de Chauvignon-Jaillot (1710-1780). At the latter’s death, the stock of Jaillot was liquidated in auction in 1781, most being melted down. However a few plates were purchased by the French cartographer Jean-Claude Dezauche, which appeared in his Catalogue of November 1781 and Desnos, who in 1789 reissued the 6-sheet map of Asia by Sanson-Jaillot. Reinier and Joshua Ottens (both 1704-1765) are publishers, cartographers and map engravers from the Netherlands. The family business was founded by their father Joachim, but most productive during the time of Reiner and Joshua.