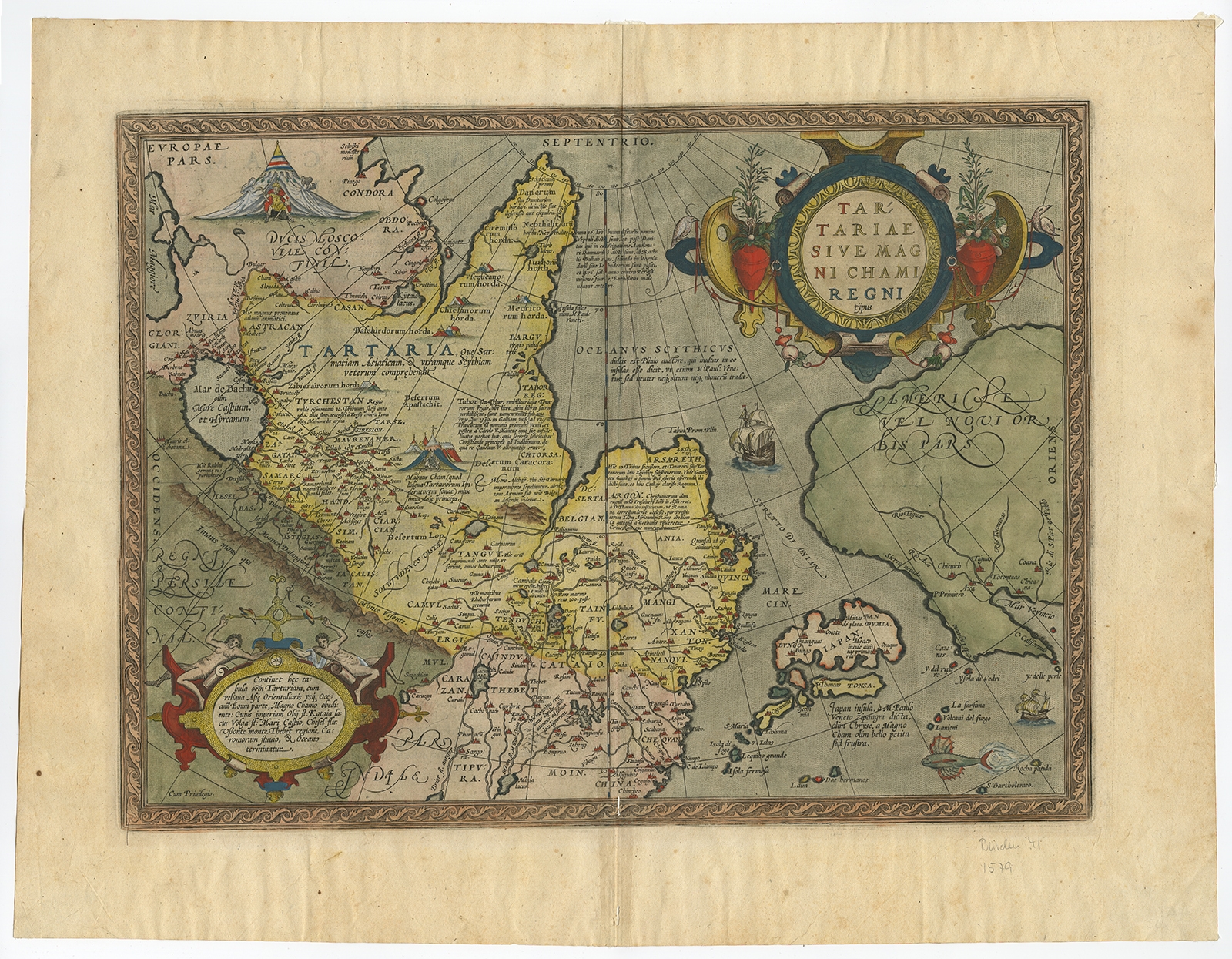 Description: Antique print, titled: ‘Tartariae Sive Magni Chami Regni typus.’ Map of Tartary, Japan and the West Coast of North America,  from the 1612 Latin edition of Ortelius’ Theatrum Orbis Terarrum, the first modern atlas of the World. The map provides a remarkable early representation of what was then the Tartar Kingdom, extending from the Caspian Sea in the west to China, Japan and Russian Asia in the east.  The also includes a remarkable early treatment of the Northwest Coast of America, California and the Southwestern US. The map is the earliest obtainable map to name California, and includes the 7 cities of Cibola in the Southwestern US, although only 6 cities are actually shown.  The Straits of Anian are also named. The map includes a very curious early treatment of Japan and marvelous detail in Tartary, Asian Russia and China, including Marco Polo & Prester John notes, several vignettes, 2 decorative cartouches, sailing ships and sea monster.  Several vignettes  depict the tents of the Tartar kings.  The map is richly annotated in Latin. Latin text on verso. Source unknown, to be determined. Ref: References: Van der Krogt 3, 8050:31; Van den Broecke, 163.3; Burden 41; Wagner, 81; Karrow, 1/67.

Artists and Engravers: Made by ‘Abraham Ortelius’ after an anonymous artist. Abraham Ortelius was born 1528 in Antwerp. He studied mathematics, Greek and Latin and travelled a lot across Europe. He established a business in dealing with books and drawing maps. His first remarkable map was a 8 sheet world map in the year 1564, but only three copies have survived. In 1570 he issued the ‘Theatrum Orbis Terrarum’, the first modern ‘Atlas’ with uniformly sized maps in a systematic collection. The term ‘Atlas’ was not used until Mercator introduced it 20 years later. Most of the maps in Theatrum have been engraved by Frans Hogenberg. At the time of publication, the atlas was the most expensive book ever printed. Nevertheless it was a big success and around 7000 copies have been printed until 1612 in many editions and six different languages. Beside the Theatrum, Ortelius compiled a series of historical maps and published it in the ‘Parergon Theatri’ which was bound with the Theatrum from 1579 onwards or published separately.