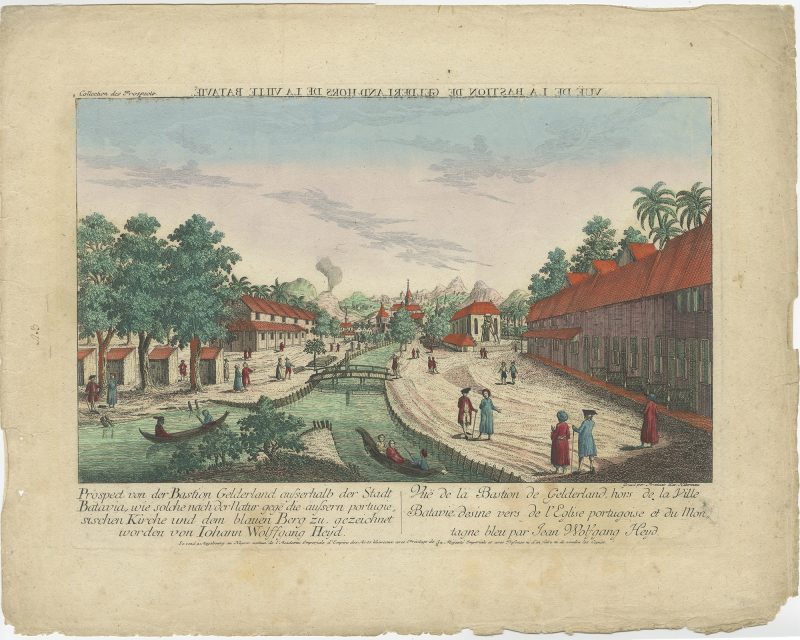 View of the Portuguese church area in Batavia – Habermann (c.1780)

An attractive late 18th century ‘optical’ print in old colour of the area around the Portuguese Church in Batavia.

An attractive late 18th century ‘optical’ print in old colour of the area around the Portuguese Church in Batavia.

Showing the European couples strolling alongside the banks of the river, small canoe-like boats carrying Europeans on the river and the volcanic hills of Bogor in the background. Note the steam/smoke coming from the cone on one of the volcanoes.

The print, which was designed to be shown through a light projector hence the reversed title. Perspective views (vues d’optique) were a special type of popular print published in Europe in the 18th century. These prints provided a form of entertainment which showed through a device called an ‘optical machine’ or ‘optique’, a forerunner of the modern slide projector. The most characteristic features of the perspective views is their emphasized linear perspective, done to intensify further the enhanced appearance of depth and the illusion of space in the prints when viewed through and optique. Another attribute of these prints is their bright, often crude hand colouring, applied boldly so as to show the tints when viewed with lens.