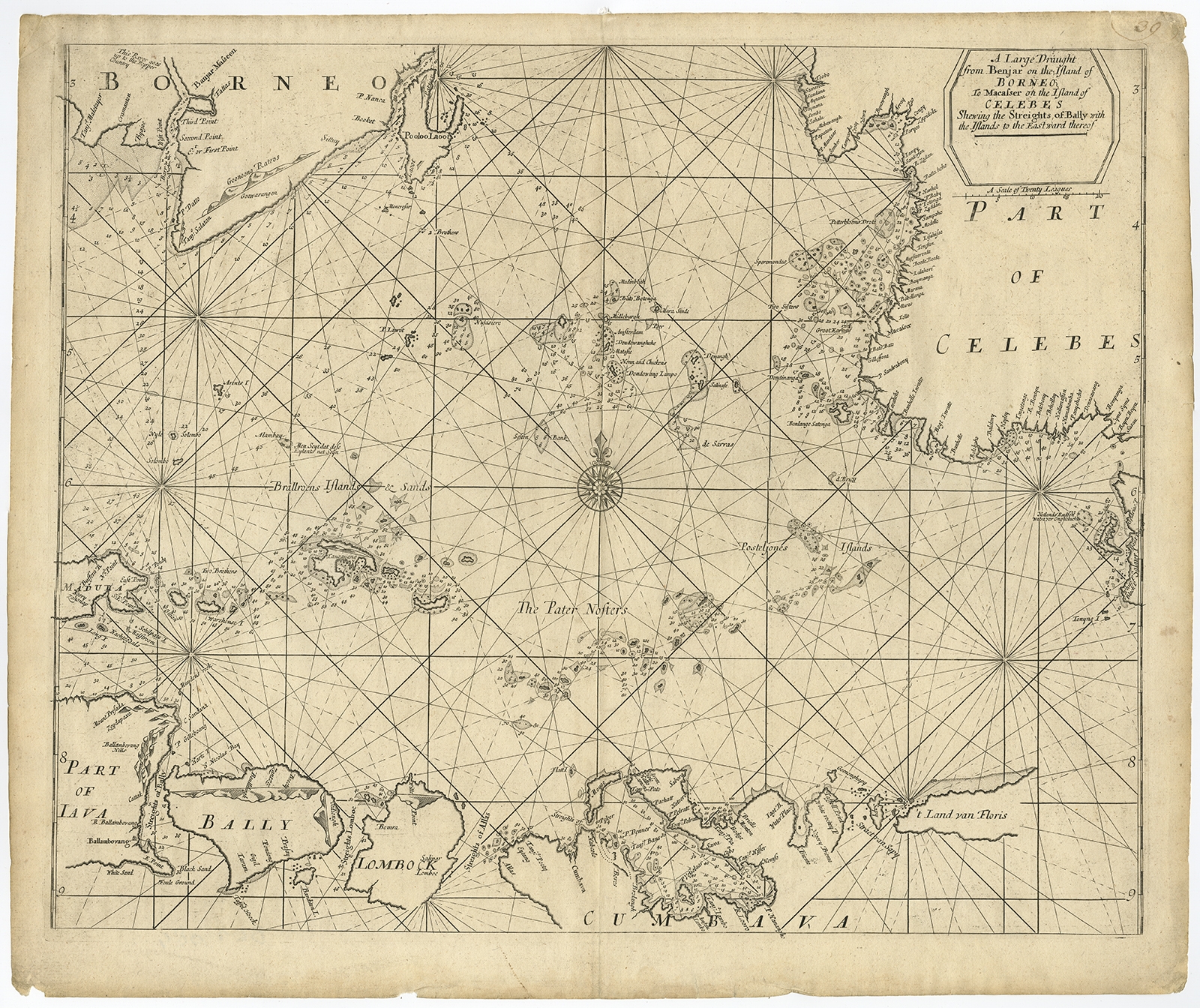 Description: Antique print, titled: ‘A Large Draught from Benjar on the Island of Borneo To Macasser on the Island of Celebes Shewing the Streight of Bally with the Islands to the Eastward thereof.’ Rare early example of this working English Sea Chart of part of Indondesia, extending from the Northwest corner of Borneo near Banjarmasin, to Java and Bali in the Southwest, ‘t Land van Floris’ in the southeast, and Celebes in the northeast. The chart includes extensive soundings, rhumblines and a compass rose. Thornton’s chart depicts the Java Sea, in the heart of the Indonesian Archipelago. By the 18th century this area was well-known to mariners, having been extensively explored first by the Portuguese and later by agents of the Dutch East India Company. East Java is depicted in the lower left corner, and further east are the islands of Bali and Lombok. Following the chain are the islands of Flores and Sumbawa. Kalimantan and Borneo are depicted in the upper right of the map, and on the far right side is Celebes, on which the handsome title cartouche is featured. The sea is elegantly traversed by rhumb lines that radiate from compass roses. Source unknown, to be determined.

Artists and Engravers: Made by an anonymous engraver after ‘Samuel Thornton’. In 1671, the London cartographer John Seller (fl.1664-97) commenced work on The English Pilot , a work that intended to challenge Dutch hegemony in the sea atlas market. Intended to be published in four books covering different regions of the globe, Seller published an uncompleted book on ‘Oriental navigation’ in 1675. Unable to continue this Herculean endeavour, Seller sold his rights to John Thornton, the official hydrographer to the English East India Company. Thornton took up the project with great fervour, publishing his first editions in 1689. Thornton did not publish his first edition of the Third Book, detailing navigation in the East Indies, until 1703. While Thornton largely based his charts on those of earlier Dutch cartographers, most notably those found in Pieter Goos’ Zee-Spiegel and Lucas Janz Waghenaer’s Mariner’s Mirror, The English Pilot proved to be enormously popular. When John Thornton died in 1708, his brother Samuel took over the business and added to and modified existing charts. All four books were produced in editions until the 1760s. The Third Book ran into twelve editions up to 1761. The project succeeded in giving the English dominance in the sea chart market as the eighteenth-century progressed.