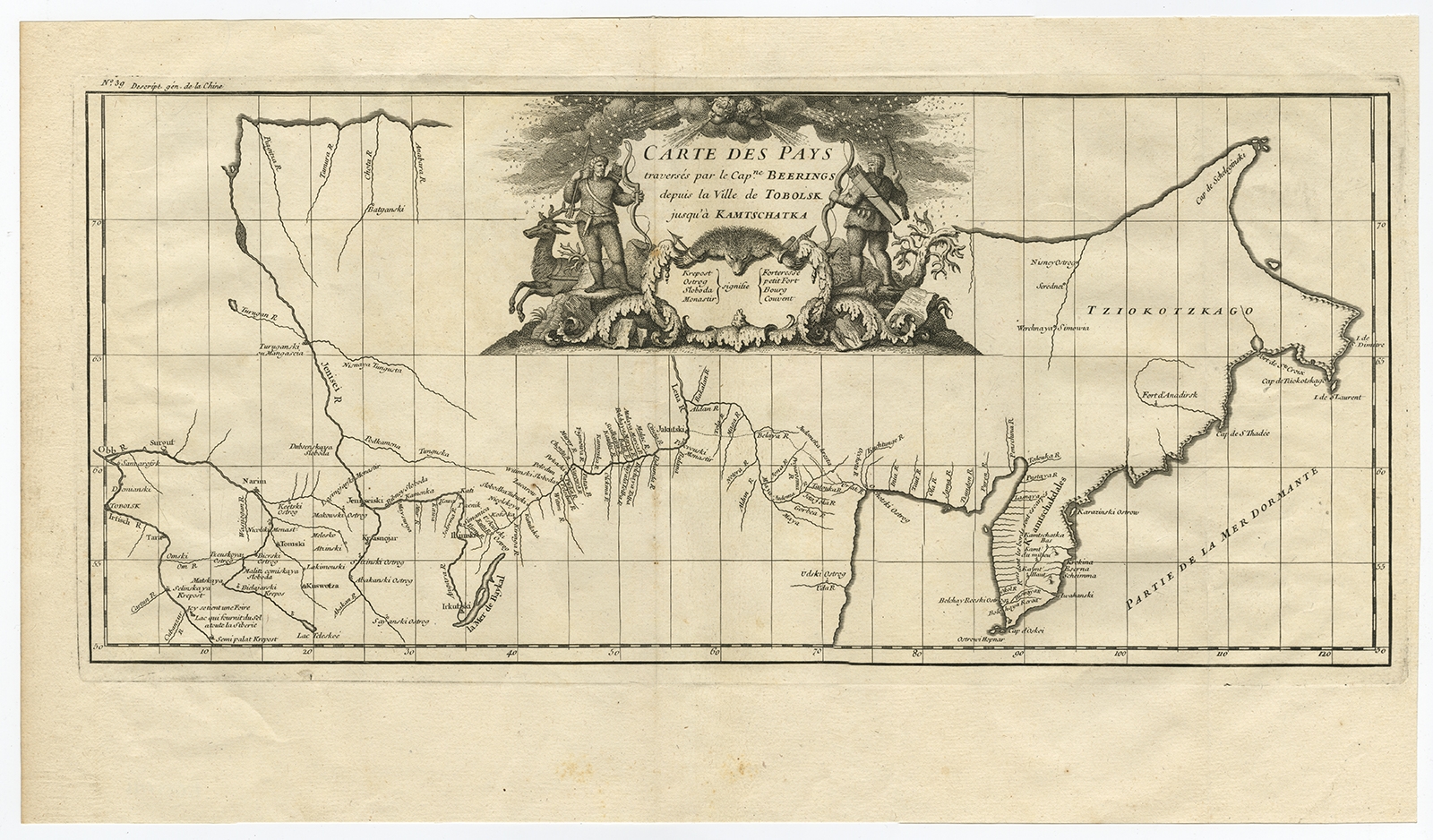 Description: Antique print, titled: ‘Carte Des Pays traverses par le Capne. Beerings depuis la Ville de Tobolsk jusqua’a Kamtschatka’ – This is the first printed map to illustrate Vitus Bering’s first voyage, representing the first broadly accurate cartography of the Russian Far East. In December 1724, Czar Peter the Great ordered the Danish-born Captain-Commander Vitus Bering (1681-1741) to lead the First Kamchatka Expedition (1725-30), in a effort to consoldate Russia’s claims to regions in the Far East. Bering’s party set out form St. Petersburg in January 1725, and after a grueling two-year journey, arrived in Okhotsk in Janaury 1727, on the Pacific Coast. The expedition then continued by ship to explore the massive Kamchatka Peninsula that runs down the East Coast of Siberia, and the shorelines beyond up to what is now the western side of the Bering Strait, dividing Asia from North America. As shown on the map, a series of forts, outposts and missions had already been established in the Russian Far East. While Bering’s expedition was by no means the first expedition to traverse Russia, it was the first to explore the coast beyond Kamchatka and to properly map the various river systems of the eastern interior of Siberia and to chart much of the Pacific Coast. The present map extends from Tobolsk in the west, the traditional capital of Siberia, all the way eastwards to embrace the Kamchatka Peninsula and the coastlines up to the easternmost point of the Chukchi Peninsula. In between are depicted large stretches of the Ob, Irtysh, and Lena Rivers, their tributaries and Lake Baikal, the World’s deepest lake. The coastline, shown from Okhotsk, Russia’s gateway the the Pacific (founded 1650), up to the Bering Strait is quite impressively mapped given the difficult circumstances in which Bering operated. The First Kamchatka Expedition was deemed a great success, and the Russian court was highly impressed by the vast distances travelled and the quality of Bering’s maps and written reports. Czarina Anna ordered Bering to lead a much larger multi-pronged expedition to the Far East. Although technically known as the Second Kamchatka Expedition (1732-41), this endeavor would have historic and far-reaching implications, as it would be the first expedition to discover and partially map what is now Alaska. It opened the way to the lengthy Russian presence on the Pacific Coast of North America (which would last until 1867), and the great period of exploration of the Pacific Northwest that would include the great names of Cook, Vancouver, Mackenizie and Lewis & Clark. The first edition of this map appeared in Jean-Baptiste Du Halde’s Description de la China (Paris, 1735), while the present edition was issued in Paris by the eminent cartographer J.B.B. D’Anville in 1737, which features cartouches added to the map. A critical map relating the exploration of the Russian Far East and the North Pacific.