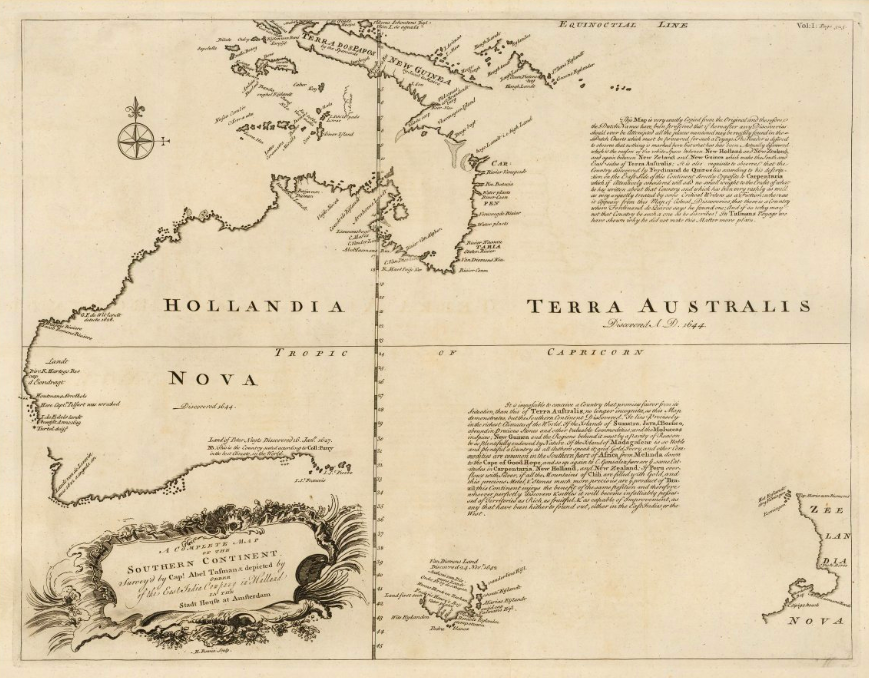 Antique Map of the Southern Continent by Bowen (c.1744) – SOLD

This first, large scale English map solely devoted to Australia shows the results of Abel Tasman’sfamous voyages in 1642-1644. Based on the first published map of Australia by Melchissedec Thevenot, first issued in 1663, with the addition of the Tropic of Capricorn, as well as several other decorative elements, including: an elegant title cartouche, a compass rose and two panels of text. The lower panel of text states ‘it is impossible to conceive a country that promises fairer from this situation than this of TERRA AUSTRALIS no longer incognita as this map demonstrates, but this Southern Continent Discovered‘. Bowen incorrectly states on the map that the continent was discovered in 1644.

Published in Harris’s Navigantium atque Itinerantium Bibliotheca, or a Complete Collection of Voyages and Travels. 2nd edition (1st edition did not include this map)

Abel Janszoon Tasman (1603?-1659), mariner, was born at Lutjegast, near Groningen, in the Netherlands. In 1642 he was “appointed to command two ships to explore southern and eastern waters. Sailing in August he discovered Van Diemen’s Land, New Zealand, the Tonga Islands and some of the Fiji group, and re-explored part of the north coast of New Guinea. On his return to Batavia in June 1643 he was chosen to take part in an expedition to form a settlement in the Tonga Islands from which the Chilean coast was to be raided; while this expedition was preparing, he was ordered to find whether there was a passage into the South Sea between Carpentaria and De Witt’s Land. For this purpose he set out with three vessels at the end of January 1644 and, following the coasts from Cape Valsche round to Cape Cloates, satisfied himself that, except perhaps at Endeavour Strait, there was no passage. He was rewarded after his return in August 1644 by confirmation in the grade of commandeur, with a substantial increase in pay dated back to the beginning of his voyage in 1642” (J. W. Forsyth for the Australian Dictionary of Biography).

Tasman’s map of New Holland was first published in Melchisedech Thevenot’s “Relations de divers voyages curieux” in 1663 and then revised until 1696. “Thevenot ensured that his book included maps at every juncture. Of the many maps, plans and drawings in the work, the map of New Holland/Terra Australia is perhaps the most politically charged… The map shows ‘Hollandia Nova, detecta 1644’ (New Holland, revealed 1644), consigned to the western side of the continent. A vast undescribed expanse between New Guinea, New Zealand and Van Dieman’s Land, is give the French appellation ‘Terre Australe, decouverte l’an 1644’ (Terra Australia, discovered 1644). Thevenot divided the continent in two at longitude 135 E. The line separating ‘Hollandia    Nova’ and “Terre Australe’ correlated to the western limit of Spanish claims in the South Pacific arising from the Treaty of Tordesillas of 1494. Thevenot was essentially reusing the Spanish boundary to open up the land east of New Holland to French interests. In effect, he was signalling what many in the French administration were then advocating : that France should emulate the Dutch in ensuring that the fledgling French East India Company had access to foreign markets… when the British government drew up the boundaries of the colony of New South Wales in 1788, it set the western limit at the meridian of 135 degrees east of Greenwich, just as it appeared o Thevenot’s ”