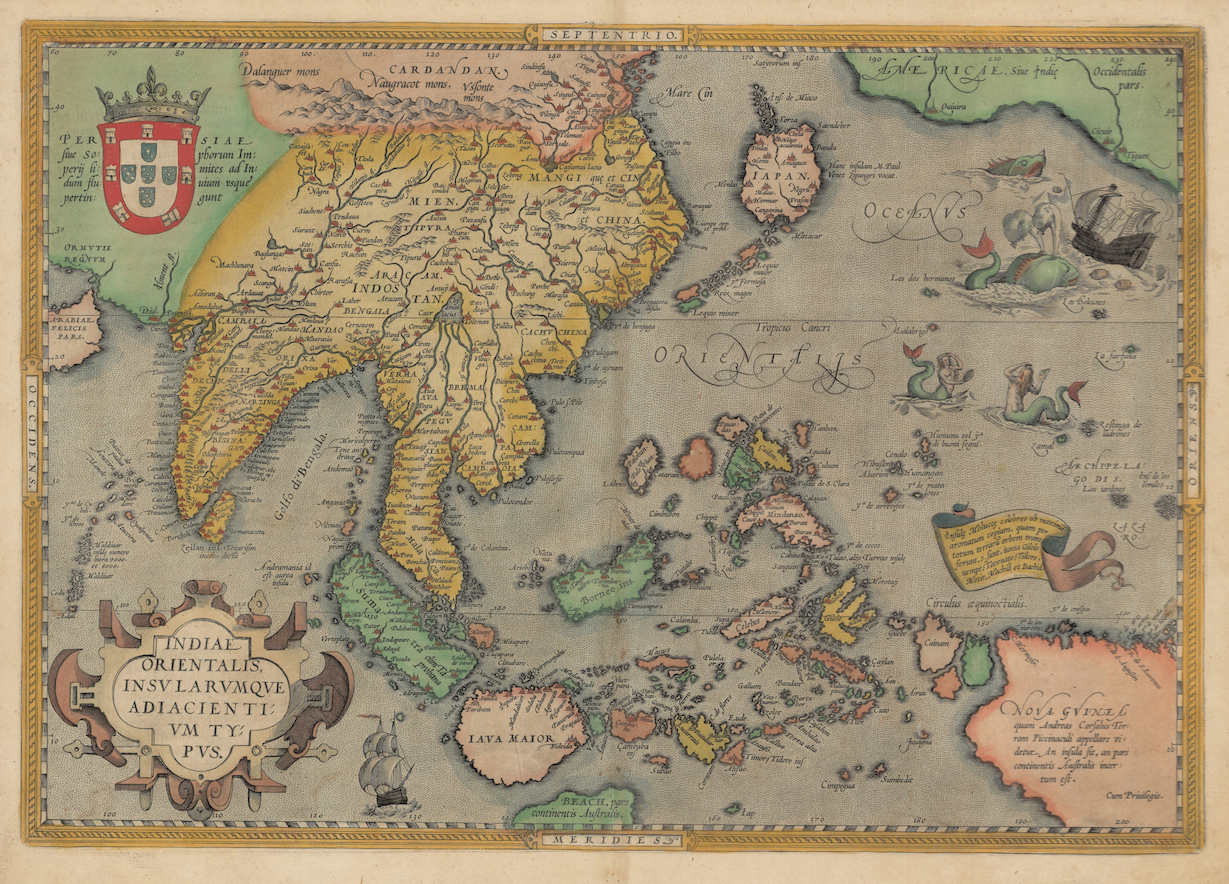 A very attractive and much sought-after late 16th century map black and white map of South-east Asia by Abraham Ortelius from a Latin edition of the Theatrum Orbis Terrarum published by Christophe Plantin in Antwerp in 1595, 1601 or 1609. The Theatrum was the first uniformly-sized, systematic collection of maps ever produced and hence is generally referred to as the first true atlas although the term was not used until 25 years later by Gerard Mercator. Latin text on verso and crossed arrows watermark in eastern sector of the map.

‘Indiae Orientalis Insularumque Adiacentium Typus’ by Ortelius is a real milestone in the cartography of Southeast Asia and the East Indian Islands. Representing the synthesis of cartographic knowledge of the region for the first seventy years of the sixteenth century and, most importantly, brought that knowledge to a very wide audience. This map must be considered one of the gems of any private collection of maps of the region and, somewhat surprisingly, is still available for collectors at a reasonable price.

Sumatra and Java are shown heavily distorted in shape together with the principal spice islands, but the emergent shape of Borneo and the Philippines is apparent as well as the general configuration of the East Indian archipelago. Java is shown as an island but with a greatly inflated shape and no topographical information along the south coast, separated from Beach, a presumed promontory on the southern or ‘fifth’ continent Australia.

Borneo is mapped in the place of the fictitious ‘Java Minor’ that frequently appeared at that latitude on the ‘modern’ Ptolemaic maps of the region, although only the part of Borneo north of the equator is shown to the west of a barely recognizable Celebes (Sulawesi), where no hint is given of the very distinctive peninsula geography of the island.

On the other hand, the clove-producing islands of Ternate, Tidore and their neighbours to the south, Machian and Bacam, are correctly located to the west of the easily identifiable island of Gilolo (Halmahera) with its four distinctive peninsulas. Buru island is located correctly to the west of the main Ambon island, now called Seram, and although the ‘Bird’s Head’ part of New Guinea (Irian Jaya) is shown as three islands, the outline of the coasts, particularly the north coast, strongly suggests that Ortelius based his information on actual charts of the coasts.

Gebe island, where the French obtained the first clove and nutmeg seedlings they smuggled out in the eighteenth century and which currently contains one of Indonesia’s largest nickel mines, is correctly located on the equator between Gilolo and New Guinea.