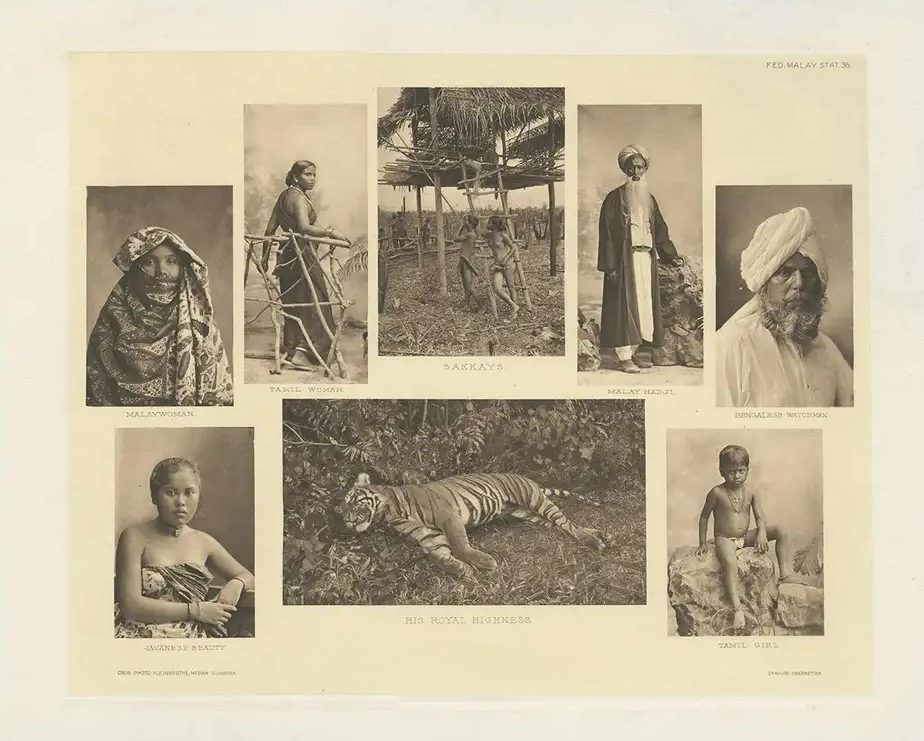 Antique print titled ‘Malay Woman, Tamil Woman, Sakkays, Malay Hadji, Bengalese Watchman, Javanese Beauty, His Royal Highness, Tamil Girl’. This print originates from a portfolio titled ‘Malay Peninsula’ by C.J. Kleingrothe. Charles J. Kleingrothe, (1864 – 1925), was a German photographer who worked in Singapore in 1889 and had a studio in Medan, Sumatra between 1889 and 1925. In the late 1860s, Kleingrothe worked for G.R. Lambert & Co., a leading photographer of Singapore whose prints had been compiled in a similar though less sumptuous volume years ago. When the plantation economy of Sumatra flourished in the latter half of the 19th century, G.R. Lambert opened a branch of its studios in Medan in 1888, then part of the old Deli Sultanate, for which Kleingrothe was put in charge.

In 1891 Kleingrothe partnered with the Swedish photographer H. Stafhell for ten years and photographed the landscapes and architecture as well as portraits. In addition to photographs of Singapore and North Sumatra, Kleingrothe photographed Penang, Malaya for his Malay Peninsula Portfolio. In 1901, the partnership ended and in 1902 Kleingrothe opened a studio on Kesawan Street in downtown Medan and photographed agricultural subjects including tobacco, coffee, tea, rubber and palm oil cultivation, administration and transport. Little biographical information has come to light about Charles J. Kleingrothe, whose images of the Dutch East Indies and British Malaya are now highly sought after collector’s items. When the Medan branch declined and was subsequently wound up during the Great War in 1916, Kleingrothe too seemed to have disappeared without a trace.