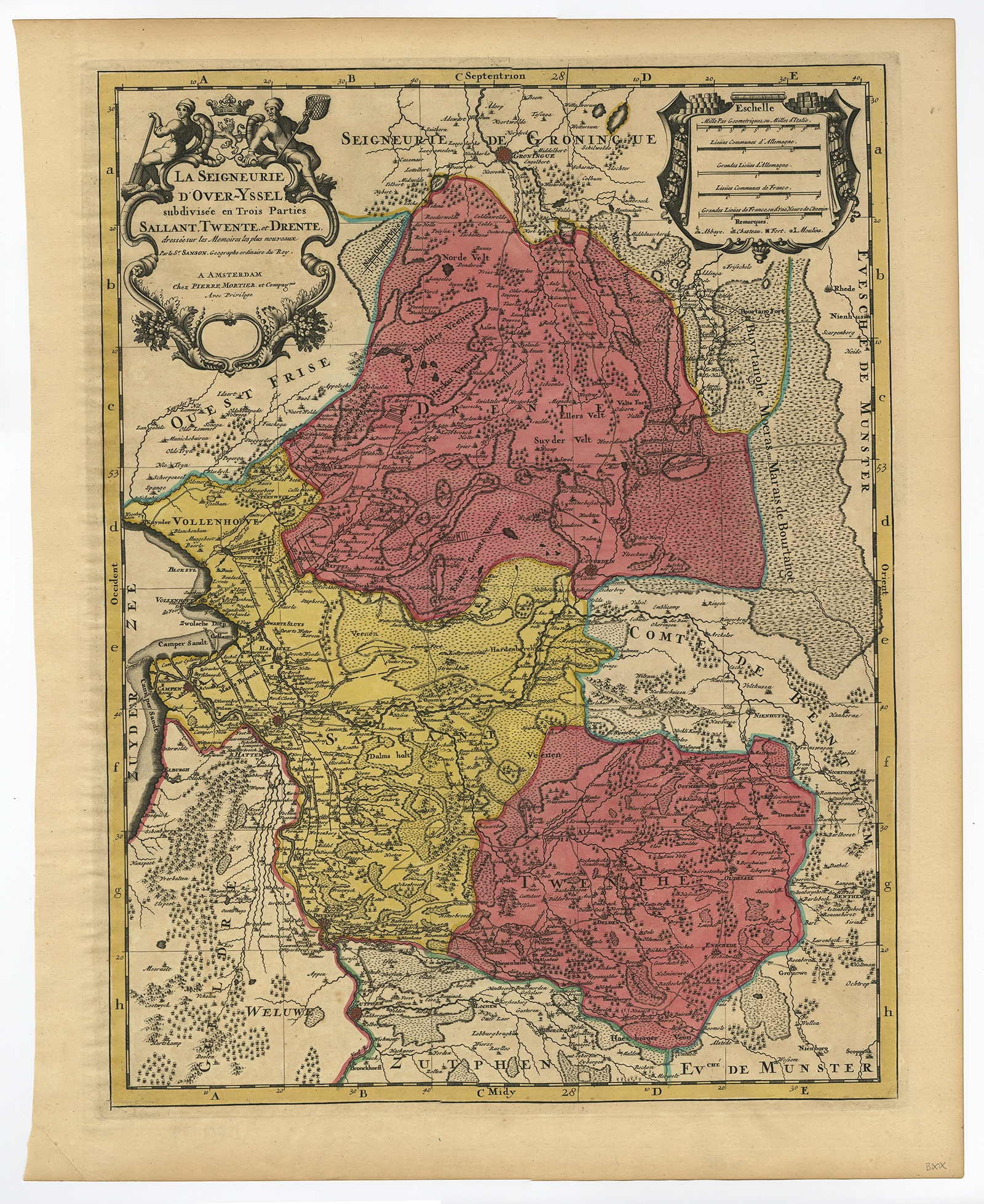 Description: Antique print, titled: ‘La Seigneurie d’Over-Yssel subdivisee en Trois Parties, Sallant, Twente, et Drente.’ – Detailed map of the province of Overijsssel in the Netherlands. From Jaillot’s “Nouvelle introduction a le geographie….” Embellished with a beautifully engraved title and scale cartouche. Cartographically this map is based on the work of Nicholas Sanson. ‘Nouvelle introduction a le geographie (…)’ by Jaillot, published in Amsterdam by Pierre Mortier ca. 1690.

Artists and Engravers: Made by ‘Nicholas Sanson d’Abbeville’ after ‘Alexis Hubert Jaillot’. Nicholas Sanson d’Abbeville (1600 – 1667) and his descendents were important French cartographer’s active through the 17th century. Sanson started his career as a historian where, it is said, he turned to cartography as a way to illustrate his historical studies. In the course of his research some of his fine maps came to the attention of King Louis XIII who, admiring the quality of his work, appointed Sanson ‘Geographe Ordinaire du Roi’. Sanson’s duties in this coved position included advising the King on matters of Geography and compiling the royal cartographic archive. Sanson’s corpus of some three hundred maps initiated the golden age of French Cartography. Alexis Hubert Jaillot (1632-1712) , was a French sculptor, engraver, publisher and cartographer. Native of Franch-Comtac, followed his elder brother, Pierre Simon to Paris in 1657. From 1664 he was student at the St. Lucas Academy. In 1665 he was created Sculpteur du Roi & in 1678, Sculpteur & Geographe ordinaire du Roi, official geographer to King Louis XIV. He worked closely with the heirs of Nicolas Sanson, Guillaume & Adrien Sanson, in the late 1660’s and early 1670’s. His most famous works include the Atlas Nouveau, first published in 1674 (reissued in numerous editions, including Dutch editions by Mortier and Covens and Mortier) and Neptune Francois (1692) and Atlas Francais (1695). He also reissued the series of 4 Willem Blaeu Continental Wall maps in about 1669 with French border texts. The family remained closely involved in cartography, Alexis Hubert being succeeded by his son, Bernard Jean Hyacinthe Jaillot (1673-1739) and grandson, Bernard Antoine Jaillot (d.1749) and the latter’s brother-in-law, Jean Baptiste-Michel Renou de Chauvignac-Jaillot (1710-1780). At the latter’s death, the stock of Jaillot was liquidated in auction in 1781, most being melted down. However a few plates were purchased by the French cartographer Jean-Claude Dezauche, which appeared in his Catalogue of November 1781 and Desnos, who in 1789 reissued the 6-sheet map of Asia by Sanson-Jaillot.